Sewing machine needles come in all types from ones meant for general purpose use to specialty needles. Choosing the right needle will make you sewing job easier.

A Universal Point Needle will serve for most purposes. These needles have slightly rounded tips so they are suitable for most sewing on woven fabrics and knits. They range in size from 60 to 120.

All About Sewing Machine Needles 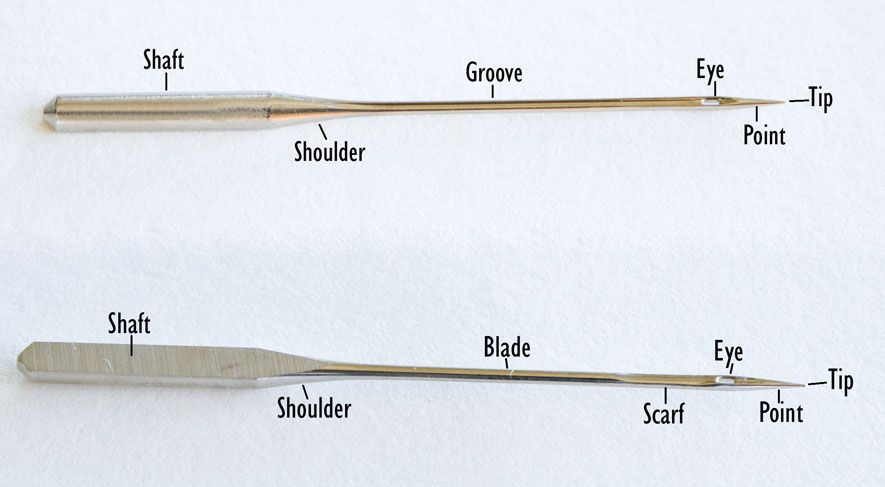 The most over-looked part of a sewing machine is the needle! Technicians often say most sewing machine problems can be fixed by changing the needle - and by that, they mean a totally brand new one just out of the package. Sewing machine needles get damaged just by use. Eventually, after penetrating the fabric hundreds or thousands of times, the point will simply get dull or even develop a burr. And in some cases, particularly if you persist in sewing over pins, the needle may get bent or broken.

Sewers spend up to thousands on fancy sewing machines, and other sewing equipment, but a new, just-out-of-the-package is often the cheapest way to improve your sewing! A rule of thumb to remember is: with the start of every new project, change your needle.

NEVER sew over pins!!!!! As in, never. Period. Never. Yeah, it's seems easier sometimes and I'm sure we've all got away with it at some point or other. But it's a disaster waiting to happen. At the least, the needle will get bent or broken. But at the worst... 1) It could throw the machine's timing off and that will mean an expensive trip to the shop. Or 2) The needle could fall down into the machine works when it breaks and get lodged down there. That may seriously damage your sewing machine. And results in another even more expensive trip to the technician. Or (worst of all) 3) the needle bits could fly off and hit you in the eye, and that will be a trip to the hospital... and may damage your eye! And it's probably painful too... So don't sew over pins!!! 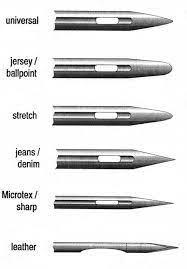 In addition to having a new needle, you must also choose the best needle for the job in order to get the best results. As a general guide, needles come in three different types of points — sharp, round-sharp, and rounded (ball-pointed).

Rounded needles are best used on knits and loosely woven fabrics. The rounded point will slip between the thread of the material and not tear them or leave a hole. If you were to use a sharp needle on knit fabric, it could slice through the threads, which would then enlarge to make a hole.

Sharp needles are best used on woven fabrics. They will penetrate cleanly through the fabric. If you were to use a ball-point needle on a woven fabric, it would tear the fibres and make large holes as well.

Universal needles are round-sharp needles. They can be used for a wide variety of sewing purposes. If your stitches are not neat and even, or you are finding holes in the fabric, chances are you are using the wrong type of needle.

How Thread Size Determines What Needle Size To Use 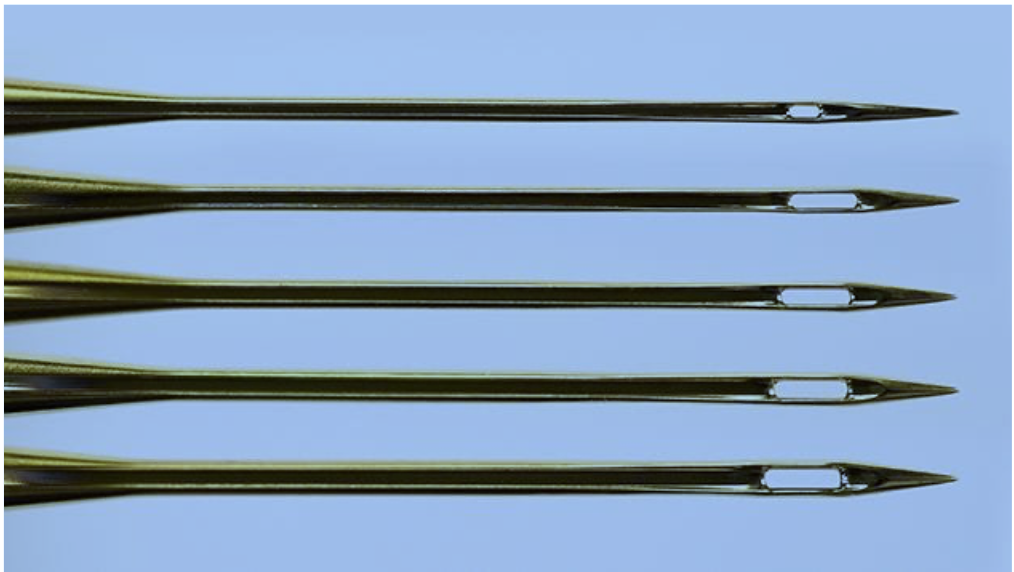 A comparison of how the needle eye gets bigger as the needle size increases.

If you find you are skipping stitches or that your thread is shredding as you sew, you probably are using the wrong size of needle for the thread. You need to change to a new needle and probably go up a size of needle.

Quilting Needles or Sharps can be useful. I used to use them exclusively for precise work in quilt piecing and sewing doll clothes. But apparently, the sharps needles they make are not the same needles they used to make—now apparently, they have a slight ball point, but not as much as a universal needle. Universal needles are slightly rounded on the point, but not as much as ball point needles. So, unfortunately, sharps aren’t my first choice for really sharp needles anymore.

These days, if you want a really sharp needle with a fine point, your best choice is a microtex needle. They are finer than a sharp needle and sew a very precise seam. They are a favourite with quilters for piecing and work very well for dolls clothes where you want precision.

I still use universal needles for general sewing, including doll clothes. They do a decent enough job for most things. Or you could try a sharp or quilting needle, which may do a little better. But the choice is yours, as to what you feel does the best job.

Ball Point Needles are used for knits. Their rounded tips slide through the fibres of the knit without catching or making runs in the fabric. Stretch needles are even more aggressive needles for working on knits—they are essential for sewing knits with Lycra or that are tightly knitted. Their rounded tips will help prevent skipped stitches. 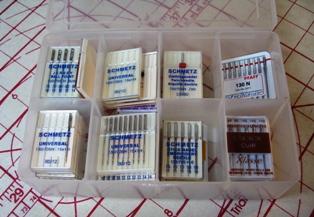 A selection of sewing machine needles

Other Needles You May Find Handy

Beyond these basic sewing machine needles, there are a number of specialty needles that may be handy for particular parts of your project.

Leather Needles are essential for sewing on leather. Their triangular tips will keep the leather from tearing.

Embroidery Needles are needed for machine embroidery work, whether on an embroidery machine or done freehand. The larger eyes keep the embroidery thread from fraying.

Topstitch Needles also have larger eyes, allowing you to use specialty threads or larger threads to top stitch your project. A Metafil Embroidery Needle is a specialized needle with an elongated eye that prevents your embroider thread from stripping and fraying. It’s especially handy for embroidery with metallic or decorative threads since it will keep them from breaking.

Twin Needles come in various sizes and types, including ball point. They also vary by the width of space between the needles. They are very handy for decorative work using two needles at once. Warning!!! Just be sure the hole in your general purpose plate is wide enough for both needles to move freely or you will break your needles—and twin needles are expensive!

So What Should You Buy?

You may never use all these sewing machine needles—a collection of basic needles, such as universal, microtex, and ball point is usually enough to get most jobs done. I keep a 5-pack of the others, just in case I need them.